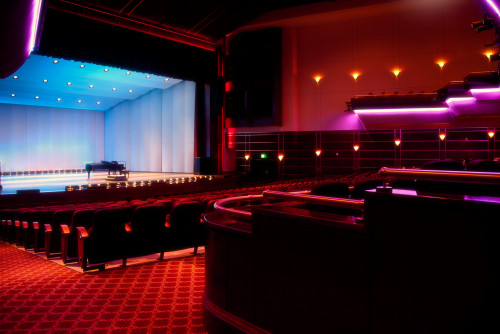 It is safe to say that when students began spring break last March that we did not expect to spend the next year separated from our friends and family, nor did we foresee having to adapt to an entirely new learning format online. This passing year has been a time of adjustment and has perhaps challenged our ideas of what it means for education and success to be accessible to all people. When faced with these challenges, students and faculty here at Lindenwood have showcased their resourcefulness and determination to build safe learning environments that still encourage students to pursue their passions. These efforts have not gone without notice, especially for several students in Lindenwood’s Performing Arts Department. In Lindenwood’s very first year of participation at The Kennedy Center American College Theater Festival (Region 5), students were recognized for their work in multiple categories. The Kennedy Center American College Theater Festival (KC/ACTF) is a national theater program dedicated to representing diversity and inclusion in the performing arts.

Since its beginning over 50 years ago, KC/ACTF has given a platform to over 400,000 students across the country to demonstrate the skills they have refined during their time at their universities. The Kennedy Center American College Theater Festival is divided into 7 regions, with Region 5 encompassing Iowa, Kansas, Minnesota, Missouri, Nebraska, North Dakota, and South Dakota. With over 18,000 students participating annually, it’s nothing short of impressive that Lindenwood’s first time joining the competition resulted in the recognition of some of our fellow students for their remarkable work. John O’Hagan, Division Director over the Performing Arts at Lindenwood and someone who has played an instrumental role in furthering student success in the theater department, agrees. In a recent statement, he says that “Clearly, LU Theater students made a strong impact at this year’s Regional festival and, in our first year of participation, have firmly put Lindenwood on the KC/ACTF map, which brings well deserved regional and national attention to our students, faculty and staff.”

Timothy Henderson Jr., a Lindenwood student set to graduate with a BA Theater degree in May 2021 whose play Speed Dating earned him Outstanding Recognition in the Gary Garrison 10-Minute Play Competition, did not shy away from the challenge of participating in this year’s virtual festival. In fact, Henderson stated that “If it were to have been in person, I probably would not have gotten the chance to do what I was able to do this year.” Henderson, whose play was picked as a finalist in Region 5, credits part of his success to his peers and fellow participants Riley Troia, Megan Pennington, Caleb Ellis, and Cameron Durbin “…stepped up to the plate and found time to perform during the break and did an amazing job. I'm so happy with what we were able to accomplish.”. Riley Troia, who directed Henderson’s play and is set to graduate from Lindenwood with a Directing BFA, was recognized for Outstanding Direction of a 10-Minute Play in the same competition. When striving to stay on top of our work and reach towards our goals, all while surviving a global pandemic, it can be difficult to see a manageable route to graduation and our futures afterward. Troia wants to assure fellow students that they have time and that it’s okay to change your idea of what success looks like in your own life. Henderson and Troia both credit Lindenwood professors Emily Jones and John O’Hagan for encouraging them to participate in the playwriting competition and giving them the tools to grow as artists.

Fellow participants in Henderson’s play also were awarded recognition as follows: Megan Pennington, Caleb Ellis, and Cameron Durban were all recognized for Outstanding Performances in a 10-Minute Play. Speed Dating has become a National Semi-finalist, and Henderson will know by late March/early April if his play will be invited to the National Festival later this year.

Megan Pennington speaks fondly of her experience participating in The Kennedy Center American College Theater Festival, her peers, and Lindenwood for preparing her for opportunities like this. “If it weren't for my time in the LU Theater Department, I would know 1% of what I know now.” Cameron Durban also expressed that his time at Lindenwood has taught him the importance of being a malleable performer and to stick with his craft- even in the middle of a pandemic! Durban stated that his favorite part of his experience was rehearsals. Even over Zoom, Durban says his peers made their work professional and fun, voicing that, “It feels like quite the accomplishment because we came together and made something beautiful even though we had to do it in different cities.”

Another project, Proof, earned Lindenwood students KC/ACTF Certificates of Merit. These were awarded to Baylee Speer for Lighting Design, Brendan Van Keuren for Sound Design, and Ryley Mayne for Stage Management for their participation in Proof. Speer, who graduated from Lindenwood in December 2020 with a BA in Theater with an emphasis in Lighting said her favorite part about participating in the Kennedy Center American College Theater Festival was “… learning that Lindenwood, despite being a fairly small private college in St. Charles, MO, is being recognized internationally.” She also stated that Lindenwood played a crucial role by dedicating the time and consideration needed to make sure these productions could be created in a safe and realistic manner.

In addition to the recognition given to Lindenwood and the hardworking students who dedicated their time to these projects, Joshua Stenger’s pitch which was a part of the pre-festival ASPIRE Leadership Conference also deserves a piece of the spotlight. ASPIRE Leadership Conference is a partnership between KCACTF and LORT (League of Resident Theaters) focused on the cultivation of artists and leaders in American theater. Stenger explained that their goal is to peruse promoting the representation and participation of Black, Indigenous, and People of Color (BIPOC) and other people of underrepresented identities in leadership in the theater and whose mission and values involve “leadership philosophy, and Representation, Equity, Diversity, and Anti-Racism Plan.” Stenger is an LU student Stage Manager who created a company called Imagine Theater Co. that focuses on creating more accessible theater experience for “people with physical/cognitive disabilities and those on the Autism Spectrum.” Stenger’s programming ideas include an audio play festival and a sensory-friendly version of Disney's Alice in Wonderland.

Everything looks different this year and for many it has been overwhelming navigating a world almost entirely online. For many of us, adjusting to a life without in-person access to our friends, peers, and mentors has been difficult, and if anything has proven how much we value our connection and depend on and encourage each other to do our best. Professor John O’Hagan shared his thoughts on the importance of these accomplishments stating that, “Our participation opens important professional networking and post-degree opportunities for our students. I am so grateful for, and proud of, our students, faculty and staff in all of the Performing Arts who, despite being in fields so severely impacted by the pandemic, continue to produce work of exceptional quality.  If that isn’t ‘Real Experience. Real Success.’, I’m not sure what is.”