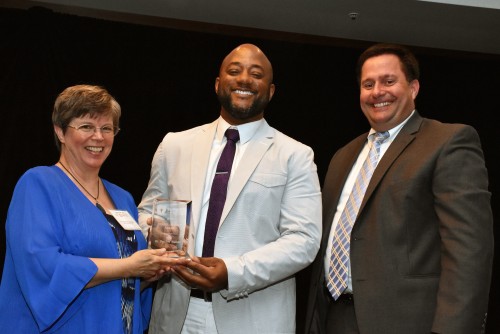 “The work they do--breaking barriers for families and children, social justice issues, advocacy,” Walker said. “They do things for the community to help families be whole again. That’s a real sustainable impact—keeping families together. I should be honoring them.”

Those who know Walker, an assistant professor of nonprofit administration, are not surprised by this. On June 25, Walker accepted the organization’s Symbol of Hope Award recognizing his work in the community. The award is presented to “an individual from humble beginnings who has created large and positive impact in the community.”

Walker, raised in Winston Salem, N.C., by his grandparents, is a first-generation college graduate, holds an M.B.A. and a law degree, and has worked as a business lawyer and a professor.

“I knew nothing about (the organization),” Walker said. “They found me. In my acceptance speech, I dedicated the award back to them and their volunteers. As a nonprofit, you can’t do anything without volunteers.”

Walker joined the Lindenwood faculty in 2012 and in his second year won the Emerson Electric Company Professor of the Year Award and was elected president of the Faculty Council. In addition to his teaching, Walker conducts management seminars for local and national nonprofit organizations, small businesses, and Fortune 500 companies to help them navigate through critical management and decision-making processes and strive toward effectiveness, efficiency, and financial stability. He also serves as chair of the university’s recently formed Diversity, Equity, and Inclusion Committee.

Prior to coming to Lindenwood, Walker was a business law and management professor at Christopher Newport University in Newport News, Va., for six years. He was also director of the university’s business institute, in which he worked with nonprofits and small businesses. When the position in Lindenwood’s Nonprofit Administration Department opened up, he saw it as an opportunity to make a larger impact.

“I’ve always believed in social entrepreneurship,” Walker said. “Lindenwood afforded me the opportunity to make an impact in large corporations, small businesses, and nonprofits who believe in social development. If you want to sell your widgets, you really need to help build the community from a business perspective. I’m interested in helping, in different ways, businesses transition from success to significance.”

Walker continued, talking about the racial tension and negative news coverage that has come to the St. Louis region the last couple years; he sees these things as opportunities.

“What if our region became a hub for peace-building, for racial harmony,” Walker said. “I always believe the glass is half full.”

As for the award, Walker said, the idea may have been to inspire the community by shining a light on him and his work, but he believes he benefited most of all.

“That award was symbolic,” Walker said. “I was raised by my grandparents, but I was never hungry or homeless. A lot of kids can’t say that. I don’t think of myself as a symbol of hope. They inspired me.”