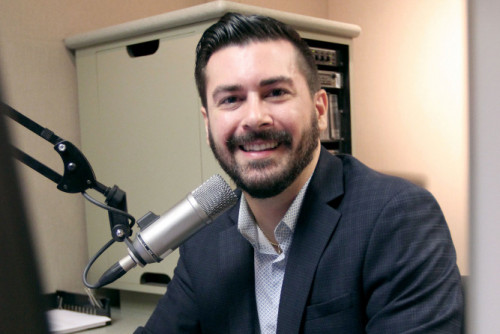 Alex Ferrario (’13, ’15) has a case of the blues. Fortunately, that means the two-time Lindenwood graduate gets to talk every day about his Stanley Cup champion St. Louis Blues and get paid for it.

“I also do daily reports from the Blues practices and games, host various Blues shows during the season, and fil in for other hosts in all sports during the off-season,” Ferrario said.

Ferrario, who was born in St. Louis in the Hill neighborhood and moved to Arnold in St. Louis County in third grade, said he started doing radio in junior year at Fox High School, where he did play-by-play for sports broadcasts there.

In particular, he wanted to work in hockey.

“I grew up listening to Jack Buck and Ken Wilson,” Ferrario said. “Hockey was always number-one for me.”

During his senior year at Lindenwood, he landed an internship as a studio assistant for the Blues broadcasts at KMOX, which evolved into a producer roll in 2012. In 2014-15, he was awarded a sports apprenticeship position, which gave him the opportunity to be on the air—filling in as a host and sitting in as a co-host. From this experience, he became a pre- and post-game host for the Cardinals and Blues games in 2015 and filled in for Sports Open Line and other opportunities during the week.

“When the Blues announced they were leaving KMOX in January, I reached out the Chris Newport, the program director, and asked about a possible position in broadcasting with the team,” Ferrario said.

He interviewed for the job in June and was hired; he started at the beginning of July.

“I tell people all the time that I would not be where I am in radio if it had not been for the opportunities I had a Lindenwood,” Ferrario said. “They put me on the air immediately. My internships would not have happened had it not been for that experience. When you get the chance, you show them you can do anything they need.”

In addition to his bachelor’s in mass communications, he has a master’s in sports information from Lindenwood, and he met his wife, Katie, there as well. 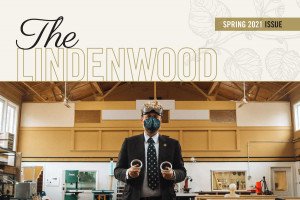