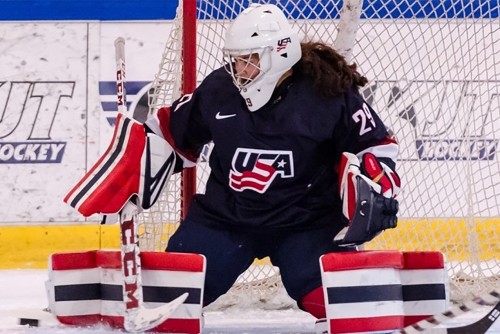 The United States women’s Olympic hockey team and goalie Nicole Hensley, who graduated from Lindenwood in 2016, won a thrilling gold medal hockey game early in the morning (CST) on Feb. 22 against Canada in Pyeongchang, South Korea.

The 3-2 win makes Hensley the first Olympic gold medal-winning athlete among Lindenwood’s students and alumni. Alumna Laia Pons won bronze in the 2012 games for Spain in synchronized swimming before she was a student at Lindenwood, and sled hockey player Josh Pauls has won gold in the Paralympics and will captain the U.S. sled hockey team in the Paralympics next month.

In addition to women’s hockey, Lindenwood students and alumni have participated in the Olympics in shooting, track and field, and synchronized swimming. Hensley, who joined the U.S. women’s hockey team in 2017, was in goal against Canada when the team won the World Championship in the fall, and in the Olympics, she started the game against the Olympic Athletes from Russia on Feb. 13, recording a 5-0 shutout and stopping 13 shots on goal.

The next day, Feb. 14, Hensley told KSDK TV’s Rene Knott in Pyeongchang that Lindenwood helped make her the competitor she is. During her career at Lindenwood, she stopped more than 4,000 shots and won the NCAA’s Top 10 Award, which is given to the top 10 NCAA athletes in any sport at any level.

“It was definitely the right place for me to be…to grow as a goaltender,” Hensley told Knott.

Canada had won gold in women’s hockey the four prior Olympics, defeating the U.S. in the final game three times, including a heartbreaking come-from-behind win in Sochi, Russia, four years ago. This time, the U.S. team returned the favor after falling behind 2-1 in the second period and tying the game at 2-2 in the third period, which was the score at the end of regulation.

Neither team scored in a 20-minute sudden-death overtime period, which led to a tense shootout in which the U.S. came out on top for a 3-2 victory. It was the first U.S. Olympic gold medal in women’s hockey since 1998 in Nagano, Japan.

The St. Louis Blues have announced that they will honor Hensley on March 15, as they host the Colorado Avalanche.