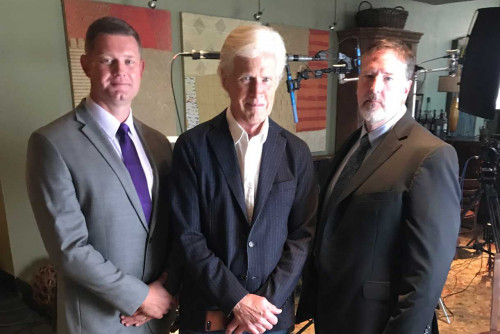 Lindenwood University Adjunct Instructor Lawrence McClain, who teaches cybercrime in Lindenwood University’s Criminal Justice program, will appear as an interviewee on Dateline NBC in an episode devoted to a high-profile 2016 murder case involving a woman named Pamela Hupp. The episode will air in St. Louis at 8 p.m. on Friday, Sept. 27, on KSDK channel 5.

McClain at the time of the Hupp case in 2016 was a detective with the O’Fallon, Mo., Police Department, detached to The St. Charles County Cyber Crime Unit, were he specialized in cybercrime investigations and digital forensics. He was among the investigators who worked the case that ultimately resulted in Hupp’s murder conviction and life sentence in prison.

The case revolved around the death of a man named Louis Gumpenberger, whom Hupp shot in her home while on a 911 call, stating he had broken into her house and threatened to kidnap her. Investigators were able to establish that Hupp had lured the man to her home to set up the story of the home invasion.

“Once we started to believe he was the victim, rather than the suspect, the question became, ‘How did these two unrelated people intersect?’” McClain said. “By examining her cell phone…we were able to determine her location on the day of the murder to include…the victim’s apartment complex.”

McClain, who worked in law enforcement for 23 years before retiring in 2017, now travels the world teaching cybercrime investigation methods to law enforcement and the military. He has taught at Lindenwood since 2012 and also holds a Master of Science in Administration from Lindenwood.

“I take that into the classroom and show real-world examples,” McClain said. “We need more people who are trained to understand the digital crime scene. Whether or not it is committed online, every crime has a digital component.”

McClain said he was contacted earlier this year about being on Dateline. For the segment, he and a camera crew spent a half day filming at the O’Fallon Police Department and the St. Charles County Cybercrime Unit. From there, he went to a studio space to be interviewed by the show’s host, Keith Morrison.

In addition to the Sept. 27 episode, the Hupp case is also featured on a six-episode Dateline podcast, which premiered Sept. 18. Material for which McClain interviewed will be featured on the podcast as well.