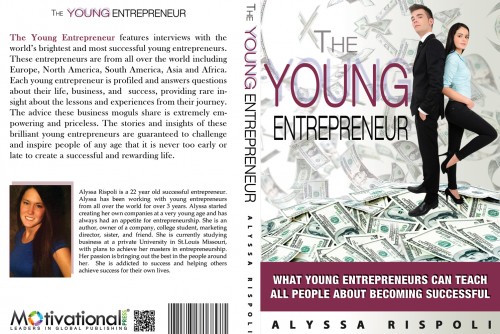 Alyssa Rispoli, a Lindenwood University business marketing major slated to graduate in December 2014, has already accomplished something most people never do. Her book, The Young Entrepreneur, was published Nov. 21 by Motivational Press and is currently available on Amazon.com, Barnes and Noble’s website, and www.TheYoungEntrepreneur.com.

The book consists of interviews with dozens of young entrepreneurs from throughout the U.S. and the world, the idea of which was to illustrate the essential building blocks of success for business professionals, especially entrepreneurs.

Assembling the material for the book took several years and required a lot of hard work and persistence as Rispoli arranged for interviews through secretaries and assistants, talking to her subjects by phone, email, and Skype.

“The process was very remarkable,” she said. “I met a lot of amazing people and made a great deal of good friends along the way.”

Manuscript in hand, Rispoli set about finding a publisher, the process for which required as much persistence as writing the book did. Rispoli discovered that many publishing companies will not even entertain a submission directly from an author, preferring instead to work through a literary agent, which she did not have. She said she “pleaded” with several publishing companies to read her book until she found one that was willing.

“The manuscript was eventually read by Motivational Press in California, and they signed me,” Rispoli said. “I believe it ended up being a perfect match, because this book is certainly motivational.”

After graduation in 2014, Rispoli said she intends to pursue a master’s in entrepreneurship.