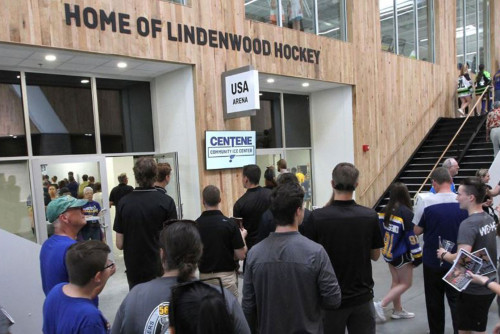 The American Collegiate Hockey Association (ACHA) has announced that St. Louis and the Centene Community Ice Center, the home for Lindenwood men's and women's ice hockey in Maryland Heights, Missouri, will host the 2022 ACHA National Championships.

The St. Louis Sports Commission and the 2019 Stanley Cup champion St. Louis Blues NHL organization will host the 10-day event that will bring more than 1,500 players and at least 72 teams from five ACHA divisions including three men's divisions and two women's divisions.  Competition will include more than 100 games March 10-20, 2022.  In addition to serving as the practice and home competition facility for Lindenwood men's and women's ice hockey, the Centene Community Ice Center, which opened in September 2019, also serves as the practice facility for the Blues.

"Having the 2022 ACHA National Championships in St. Louis will provide a great opportunity to showcase our ice hockey programs, athletic department, university, and the new Centene Community Ice Center," Wachler said.  "The chance to welcome teams from all over the country in conjunction with the St. Louis Sports Commission and St. Louis Blues organization, and for our men's team to compete in front of our home fans for a national title is as exciting as it gets and I look forward to a great event."

"We are excited for our hockey program, Lindenwood University, and the St. Louis hockey community to have the ability to showcase the ACHA and our first-class facility in the Centene Community Ice Center."

"St. Louis is such a great location for the ACHA and its member schools across all divisions," Barnett said, "About half of all ACHA member teams, in both the men's and women's divisions, are within an eight to ten-hour drive to St. Louis.  With the support of the St. Louis Sports Commission and the Blues, we're looking forward to a great event to showcase the very best of ACHA hockey in 2022!"

Blues President and CEO Chris Zimmerman noted the opportunity to continue the growth of hockey in the region.

"We are proud to bring another marquee collegiate hockey tournament to St. Louis," Zimmerman said.  "This is the Heartland of Hockey and the Centene Community Ice Center is the hub of hockey development in the Midwest.  Hosting the ACHA National Championship is a testament to the St. Louis community and the great strides we have made in growing our great sport throughout the region."

Patrick Quinn, Chairman of the St. Louis Legacy Ice Foundation, expressed how perfect the event is for the new venue.

"The ACHA National Championship is exactly the type of event we had dreamed of hosting when designing the Centene Community Ice Center," Quinn said.  "It's a great chance to showcase one of hockey's largest amateur events here in The Heartland of Hockey in a world-class facility ideally suited for players and fans alike."

"We are thrilled to host the ACHA National Championships in St. Louis," Roseman said.  "Along with our partners, we look forward to welcoming everyone to the Heartland of Hockey and creating a first-class experience for the student-athletes, coaches, and fans representing at least 72 teams from around the country."

The ACHA will also utilize the Maryville University Hockey Center in nearby Chesterfield, Missouri for overflow games and practices.

The Centene Community Ice Center has served as the home of Lindenwood men's and women's ice hockey since it opened in September 2019.  In their first season at the new venue, the ACHA Division I Lions went 27-7-0 overall and won the Central States Collegiate Hockey League Championship title.

Fans can learn more about the ACHA and the championships by contacting ACHA Executive Director Craig Barnett at cbarnett@achahockey.org.