Commencement Ceremonies Will Have a New Look and Feel 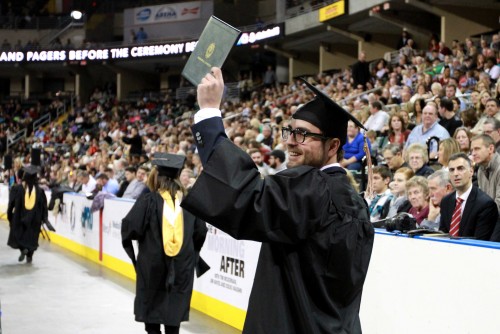 Graduates and their families attending the Commencement ceremonies at 7 p.m. on May 5 and 6 at the St. Charles Family Arena will be in for different experience from previous ceremonies with changes to stage pieces, lighting, music, and the script to create a better sense of flow and place more focus on the students as they reach the end of their academic journeys.

Emily Jones and Stu Hollis, faculty members of the Theatre Department, were the lead designers of the changes, which were requested by Lindenwood System President Michael Shonrock to tell, through the ceremony, the school’s story and the students’ story.

Jones said the first meetings on the ceremony occurred in January with most of the stage work starting in March. Hollis designed the stage pieces, which have a definite theatrical feel. Behind the traditional school flags will be a multi-piece backdrop depicting the university’s historic Alumnae Gate on Kingshighway. The stage will be lit with special lighting to focus attention there, and the visual story of the ceremony will be told in multi-media on a suspended 30-by-17-foot video screen.

“Families will be able to see their students very prominently as they walk across the stage to get their diplomas,” Jones said. We took the university’s brand, ‘Like No Other,’ and applied it to the ceremony as a celebration that still respects the academic traditions of commencement.”

The music before and during the ceremony will be recorded, including a performance by Lindenwood’s premier acapella group, Voices Only, that will be shown on the video screen. The script has been streamlined and focuses on the awarding of the degrees. Jones said the effort included the combined efforts of many departments, including Academic Services, Theatre, Music, and LUTV.

“What I hope is that the visual changes to Commencement will support the longstanding traditions and heritage of Lindenwood University, speak to the present, and bring into focus the accomplishments of each individual graduate as they cross the stage and receive their degree.”