Skip to Main Content
Home
About
News
Deemed Unsafe, Brick Water Tower Near Spellmann Center to be Removed, Monument to be Built in its Place

Deemed Unsafe, Brick Water Tower Near Spellmann Center to be Removed, Monument to be Built in its Place 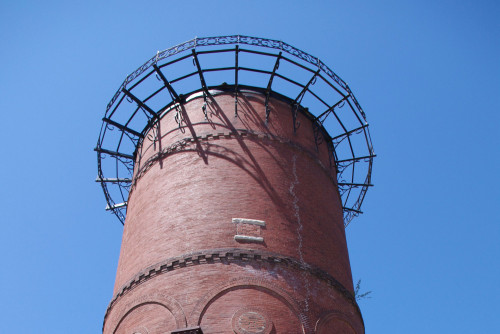 The historic brick water tower, located near Spellmann Center on Lindenwood’s campus, will be removed due to its deteriorated condition and structural safety concerns.

The brick water tower that formerly served the residents of St. Charles has been on the Lindenwood campus since 1898 when the campus expanded around and beyond it. The water tower was destroyed by a tornado in 1896. It was then rebuilt in 1898. In 2016, Lindenwood erected a protective fence around the tower to keep community members at a safe distance.

The university reviewed reports from an independent structural engineer in November 2019 and provided the report to the mayor of St. Charles. The structural engineer recommended taking down the tower due to structural safety concerns. In the tower’s current condition there are concerns that bricks would continue to fall from it and potentially harm students, faculty, staff, and guests on campus, or the entire tower may collapse.

“Lindenwood is dedicated to the safety of its campus community, and our commitment to the welfare of our students, faculty, and staff, which led to the difficult decision to remove the water tower,” said John R. Porter, Lindenwood University president. “No one wants to say goodbye to this historic structure, but we are at an unfortunate crossroads where we must decide between preserving a piece of the past and safeguarding the physical wellbeing of our future. It’s a sad time, especially for those who attended Lindenwood and fondly recall the tower as part of their experience.”

On April 20, Farmer Environmental Services completed an environmental analysis required by the State Department of Natural Resources. On May 5, the city requested the structural engineer to validate the city criteria for demolition of a dangerous building and concurred with the safety concerns. Two days later, the City of St. Charles issued a permit for demolition.

Lindenwood plans to construct a monument in place of the current water tower with salvaged materials from the original structure. This monument will remain as a reminder of the water tower’s historical significance to the St. Charles community and Lindenwood University. Currently, the plan for the

project includes the construction of the monument on campus in Lindenwood’s own MakerSpace with
faculty and student involvement. The monument will have a future public dedication and a plaque to highlight its history and importance.

“We want to use this as a learning opportunity,” Porter said. “We are deeply saddened to lose this piece of history, but we want to remember it as best we can and help future members of the Lindenwood community remember.”

Lindenwood will preserve 100 of the tower’s antique bricks for purchase by members of the community who want to commemorate the tower’s role in St. Charles and Lindenwood's history. Information about purchasing bricks will be available at www.lindenwood.edu once the bricks are available.