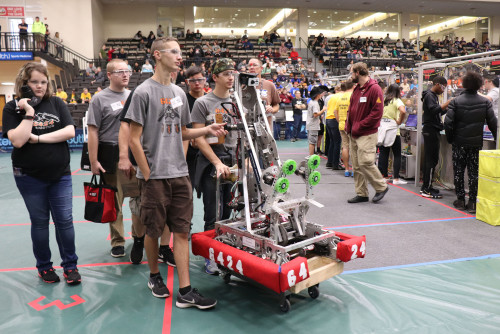 FIRST Robotics held its Gateway Robotics Challenge at Lindenwood University’s Hyland Arena on Sept. 29 as part of the organization’s partnership with the university. The “off-season” event was a competition among high school-level teams that competed in the FIRST Robotics competition in March, using the same course and challenge.

As a first-time sponsor of FIRST Robotics, Lindenwood hosted a kick-off event Jan. 6 at the university’s J. Scheidegger for the Arts, where high school-level teams learned the details of the challenge for this year’s competition and could inspect some scale models of the game pieces. The competition took place in March in St. Louis with 170-pound industrial-grade robots, designed by the student teams specifically to complete the challenge. The Sept. 29 event offered teams another opportunity to compete with the same challenge as was used in the March competition. Thirty teams took part in the event.

“Lindenwood is delighted to continue its partnership with FIRST, bringing an amazing group of students to campus to participate in the Gateway Robotics Challenge this fall,” said Sara Wiedman, assistant vice president for enrollment management at Lindenwood. “Students involved with FIRST learn important life skills and leave with the confidence to be leaders in science and technology. These are exactly the types of students who thrive at Lindenwood University.”

Lindenwood and the Gateway Robotics Challenge collaborated with the Greater St. Charles Convention and Visitors Bureau for this event.

“We are thrilled to partner with the Convention and Visitors Bureau for this event,” Wiedman said. “The bureau says that they look forward to welcoming the visiting teams to the area and wishes all the teams best of luck with the competition.”