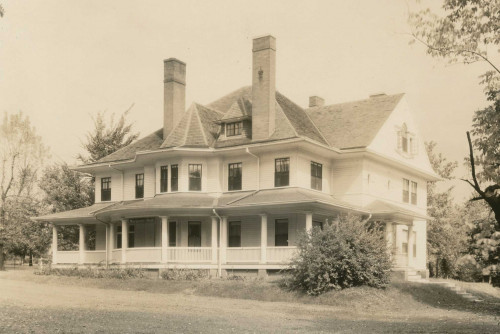 Lindenwood University history students in The Rise of Modern America, taught by Dr. Jeff Smith, are creating a virtual tour of lost buildings in St. Charles using ArcGIS mapping technology and good old-fashioned research. The project may ultimately be accessible to the community, providing a glimpse at a bygone era in St. Charles.

In lieu of writing a paper for the class, Smith challenged students to discover older and historical buildings in St. Charles and their historical significance on the area. Some of the buildings are still in existence, although used differently than in years past, but many are no longer standing.

“Students wrote an interpretive piece on each building, telling its story and how it is a window into something much larger in history,” said Smith.

The ages of the buildings range from the end of the Civil War to the end of World War I.

Smith said that some of the students were nervous, but the class worked together as a creative team. The students each had different takes on their buildings, even when those buildings had similar histories.

Smith added, “We’re using local buildings and their stories to tell us about a bigger narrative.”

The Lost St. Charles project has attracted local support and has the potential to gain public exposure.

“St. Charles County Executive Steve Ehlmann, who also wrote a book on the history of St. Charles County, came in to do a guest lecture for the class,” said Smith. “He liked the idea and would like to link the project from the county website. The St. Charles Historical Society also expressed an interest in the project on their site.”