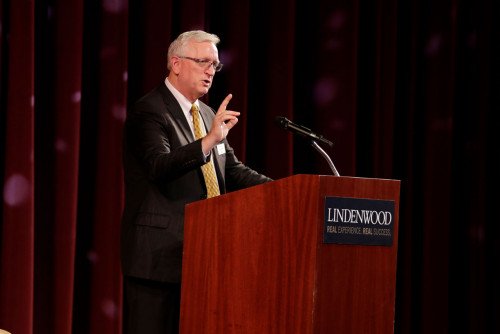 On July 1, John R. Porter took office as Lindenwood University’s 23rd president. Prior to this, on June 27, Porter spoke to the university’s faculty and staff at the J. Scheidegger Center for the Arts’ Lindenwood Theater. Porter was introduced by Art Johnson, who has served as acting president since February, and gave an informal address.

Porter has worked for 33 years for IBM, including the last 15 in senior management, and has also served as a board member in higher education and as an adjunct instructor and visiting professor.

Porter previously served as vice president of services for a premier IBM Business Partner - Gulf Business Machines in Dubai. He has served as a member of the Board of Trustees at Evangel University, from which he holds a bachelor’s degree, and also has experience as a university fundraiser. He has an MBA from Washington University in St. Louis and is working toward a Doctor of Education degree from Johns Hopkins University with an anticipated graduation date of May 2020.

Top Gun Ventures, led by managing partner Don Tuttle, was retained to manage the presidential search. Tuttle said, “As the lead search consultant, I am extremely pleased that we were able to identify and recruit a Game Changer such as John R. Porter.”

The firm received a large, global, and diverse group of candidates for consideration.

“We sought input prior to and during the process from the faculty, staff, students, and administration regarding the qualities necessary for the next president of Lindenwood,” said J. Michael Conoyer, M.D., chairman of the Board of Trustees. “It all came down to leadership and John’s track record as a proven leader. He will serve Lindenwood well.”

During his professional career, Porter has worked in numerous locations in the United States, as well as in South Africa, in addition to his current post in Dubai. Porter and his wife, Beverly, will reside in the Lindenwood House on campus. They have three adult children, all of whom live in the Kansas City area.

“I have always aspired to lead a university because of my admiration for higher education,” Porter said. “I have prepared myself for this throughout my career and look forward to leading this great institution.”

John R. Porter has been employed by IBM for 33 years, with the last 15 being in senior management. He has led various IBM divisions in innovation, creativity, growth, continuous improvement, and development of new revenue streams—all while instituting cultures of excellence. He has worked in numerous locations throughout the United States as well as in South Africa. While at IBM, John was recruited to Gulf Business Machines, an IBM business partner, to lead their services division in the Middle East. He has resided during that tenure in Dubai, United Arab Emirates.

While highly successful in the business world, John has always aspired to lead a university and has worked tirelessly toward his goal. His academic pedigree includes an undergraduate degree from Evangel University in Springfield, Mo., an MBA from Washington University in St. Louis, Mo., and he is currently studying towards a Doctor of Education degree at Johns Hopkins University in Baltimore, Md., with an anticipated graduation in 2020. John has experience as an adjunct professor, a university fundraiser, and a board member at Evangel University.

Those who have worked with John in the past are highly complimentary of his communication skills, his business and financial acumen, and his overall character, emphasizing his integrity and impeccable honesty. John combines both the traditional and non-traditional skills necessary to not only keep Lindenwood competitive, but also to collaboratively develop programs to sustain Lindenwood’s position at the forefront of educational innovation and academic excellence.

John and Beverly, his spouse of 35 years and a CPA, have three grown children, all of whom reside in the Kansas City area. They maintain a home near their family in Lee’s Summit, Mo., but will make the Lindenwood house their new residence effective July 1, 2019.

We are excited to welcome John R. Porter as the 23rd President of Lindenwood University, as well as his spouse Beverly. Please join us in doing so.