Republican Rep. Timothy Jones, District 110, has been named the senior policy fellow for the John W. Hammond Institute For Free Enterprise at Lindenwood University. Jones was elected to office in 2006 and is the Speaker of the House. Because of the state’s eight-year term limit, Jones will leave office at the end of December. 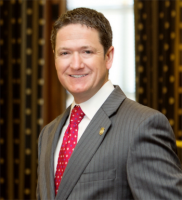 “I’m very excited to transition out of my elected role as Speaker of the House back into private life,” Jones said. “As part of that, I’m excited my first role will be to serve at the Hammond Institute. I hope to take the experience I’ve gained over the last eight years to help benefit (Hammond Institute).”

The Hammond Institute is a new research center at Lindenwood University. Its mission is to foster free enterprise and civil and religious liberty through the examination of market-oriented approaches to economic and social issues. This mission is based on the view that a limited government, such as that laid out in the Constitutional foundation of the United States, is a necessary component of a just and prosperous society.

Howard Wall, Director of the Hammond Institute, said Jones will help arrange policy forums, bring in speakers, and serve as moderator at events such as a scheduled appearance in March of Grover Norquist and Ralph Nader. Norquist is the president of Americans for Tax Reform, and Nader is a long-time consumer advocate, political activist and candidate for President.

Roger Ellis, Dean of the School of Business and Entrepreneurship at Lindenwood, said part of the Institute’s mission is to promote free enterprise, and Jones is well suited to hold the role of senior policy fellow because that is an area he concentrated on as part of the legislature.

“We’re extremely honored that Rep. Jones will join the institute,” Ellis said. “His selection has been ongoing for the last three or four months. We’ve had local hearings at Lindenwood. That’s when the conversation started. He was here a few times. He had discovered Lindenwood and the School of Business and was attracted to our mission.”

Jones said his experience as a legislator and Speaker of the House has allowed him to assemble a vast network of prominent people throughout the state and nation. The Hammond Institute will be able to tap into that network and draw a wide variety of expertise and opinions. Jones said his time in office has helped him become a good communicator, and an expert in public relations and marketing and communications. He’s a frequent guest host on 97.1 FM

Jones said he will not run for a state office in 2016.

“I’ve thought a lot about what I’m going to do after being speaker,” Jones said. “I’ve always been a huge fan of think tanks, so when I found out about Hammond, I was so excited that a think tank was created like this in my backyard and it’s a thrill they want me involved.”