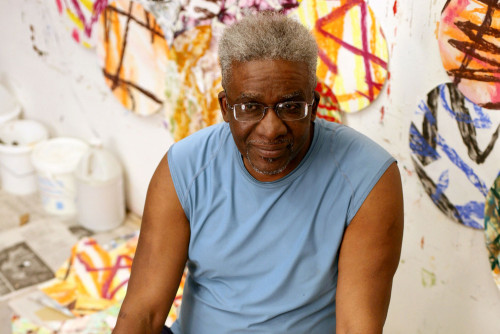 Lindenwood alumnus Lamerol Gatewood (’77) has made a career as an artist and educator in New York for decades, and now, one of his paintings has made its way back to St. Louis and is on display in the St. Louis Art Museum exhibit, The Shape of Abstraction: Selections from the Ollie Collection.

The exhibition opened Sept. 17 and will be available for viewing through March 8, 2020. It includes a number of photographs and paintings that were donated to the museum from the personal collection of Ron Ollie in 2017. The collection features five generations of American and European black artists that have revolutionized abstract art since the 1940s. Gatewood’s drawing, “Untitled No. 2002-038,” a 19.5-by-26-inch acrylic/oil sticks on paper, was one of 40 pieces the museum selected to be shown in the exhibition.

“We chose Gatewood’s piece for a variety of reasons,” said Gretchen L. Wagner, the museum’s Andrew W. Mellon Foundation fellow for prints, drawings, and photographs. “Gatewood’s drawing demonstrates the strong linear marks which enliven his work as a whole. We are also extremely pleased he has a connection to St. Louis, and we want to celebrate that as well.”

Wagner said Gatewood is among the youngest of five generations of practitioners whose art is included in the exhibition and represents the energized and ongoing exploration of abstraction.

Gatewood kicked off the exhibition by speaking at a private reception, where he thanked long-time collectors Ron and Monique Ollie for making his long-term dream a reality, as well as Renee Franklin, director of audience development at the museum, for being instrumental in having him as a guest speaker at the event.

“Many of my mentors and contemporaries are in the Ollie Collection,” said Gatewood.

The successful New York-based painter, who graduated from Lindenwood with degrees in fine art and K-12 education, sold the piece to Ron Ollie in the late 1990s. They met on the “gallery scene” and became lifelong friends.

Gatewood has since retired from his 25-year profession as a studio art and art history teacher for the New York Department in Education, though Gatewood is still an active painter. He has created many different bodies of work throughout the years, with his primary interest being abstract art. He said his art is constantly changing and believes it is important for an artist’s work to evolve.

“What people see in my paintings is always a mystery and learning experience,” Gatewood said. “People see many different things and come up with all kinds of ideas. Oftentimes, I get my ideas from the people who make comments that I had not thought about. That is why I do not give my paintings a specific title. It is about free thinking and having a vision in life.”

Since Gatewood’s time at Lindenwood, he has expanded his repertoire considerably. He said he sometimes reminisces about his years as an undergrad and newcomer to the art community. At the time, his primary interest was in ceramics and pottery. Caught up in his newfound love, Gatewood fondly recalls spending many late nights in the university’s studios.

Wanting to give back to the place that helped him get his start, he donated a collection of his work to Lindenwood University in 2013, several of which are on display in Harmon Hall, primarily on the second floor.

Gatewood is currently working on a new body of work, which he calls Abstract Energy of Sound. He is also showcasing some new work in an exhibition at the Black History Museum & Cultural Center of Virginia, running until Dec. 21, 2019.

This story was originally published in Lindenwood Magazine, a publication created to keep our alumni and friends up to date on the happenings at Lindenwood.