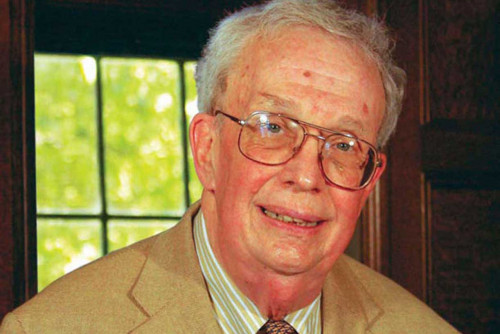 The Lindenwood University community is saddened by the passing of Dr. George Hickenlooper, Ph.D., who worked as a professor for the School of Humanities for over 20 years.

Hickenlooper passed away Thursday, July 18. He was a beloved professor and colleague within the Lindenwood University community. Hickenlooper began teaching at the university in 1992. He said he enjoyed working at Lindenwood because of the wide diversity of the student body. By the time he retired in 2014, he was awarded the title of professor emeritus.

Aside from earning the highest honor a faculty member can achieve, Hickenlooper was an award-winning playwright. He won awards from the Missouri Association of Playwrights and the Buckham Alley Theatre. Upon retirement, Hickenlooper remained very active, especially with his playwriting. He enjoyed attending performances and going to museums with his wife, Jane. He was even able to focus on polishing up his cooking skills.

“George was an inspiration to his colleagues,” said Justine Pas, associate dean of the School of Humanities. “We admired his intelligence, creativity, sense of humor, and lifelong love of teaching.”

“In addition to being a beloved professor and colleague, George was a talented playwright whose work was performed both on the Lindenwood campus and in the St. Louis region,” said Mike Whaley, professor of history. “We will miss him.”

A memorial mass will be held in his honor on Saturday, Aug. 10, at the Old Cathedral the Basilica of Saint Louis at 11 a.m.