Lindenwood University has been recognized for the fifth time in the annual “Great Colleges to Work For” report assembled by the Chronicle of Higher Education. The results of the study were released July 22, 2013, in the Chronicle’s sixth annual report on the academic workplace and were derived from a survey of more than 44,000 employees at 300 colleges and universities in the United States. The honor marks the fifth listing in six years. 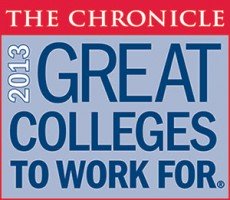 The results were based on a two-part assessment that included an institutional audit of demographics and workplace policies and practices, and a survey of faculty, administrators, and professional support staff. The employee survey was the primary factor in determining which institutions were recognized, according to the Chronicle.

Lindenwood was also recognized as a Great College to Work For in 2008, 2010, 2011, and 2012. Lindenwood President James D. Evans, PhD, said the honor is the result of ongoing efforts to foster a professional environment of support and respect among the faculty and staff.

“We are extremely pleased to have been cited for the fifth time in six years among this select group of universities recognized by their employees for a great work environment,” Evans said. “I believe that feeling is a natural result of our collective devotion to a wonderful university mission and, of course, to an ethos that always places the students first.”

Lindenwood University, founded in 1827, is an independent liberal arts university offering more than 130 undergraduate and graduate degree programs in diverse areas of study and traditional and accelerated formats, including online. Lindenwood operates a residential campus in historic St. Charles, as well numerous extension sites throughout the St. Louis Metropolitan Area.