Skip to Main Content
Home
About
News
Lindenwood Staff Raises over $2,200 for Youth In Need through 'Penny Wars'

Lindenwood Staff Raises over $2,200 for Youth In Need through 'Penny Wars' 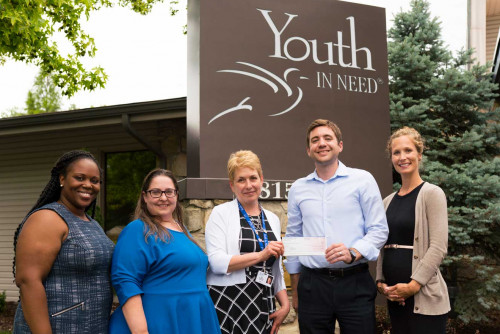 Lindenwood University staff members raised $2,247.01 for charity through “Penny Wars,” a competitive fundraiser pitting different departments around the school against each other.

The winning team, Enrollment Management, chose where the donation would go from a list of researched organizations. They held a vote within their department and selected Youth in Need, an emergency shelter for children and teenagers, and presented a check to the organization on Wednesday, June 19.

Monica Seiter, payroll manager and president of Lindenwood’s staff council, said Youth in Need was the overwhelming choice in the vote.

“Staff Council’s only restriction was that we wanted the money to go to an organization that was a good steward of their contributions, and Youth in Need was one of the highest rated on several charity watchdog websites,” Seiter said.

In Penny Wars, each department accumulated points by collecting pennies, while opponents could sabotage the scores of other teams by putting silver coins – nickels, dimes, and quarters – and dollar bills in their rivals’ collections. Each penny was worth one point, while every cent from silver or paper money counted as negative points. The team with the highest point total won.

The Staff Council wanted to include employees in a charitable activity during the spring.

“We came up with the idea of the penny race and the council’s activity and engagement sub-committee planned and executed the race,” Seiter said. “Enrollment Management won the race!”