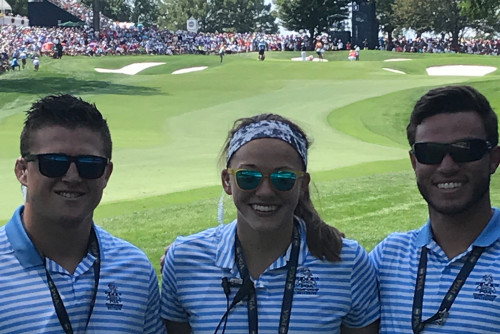 Several Lindenwood students and alumni got a glimpse into the world of event management by working and interning at the 100th PGA Championship in St. Louis. The championship, one of the PGA’s most attended events in history was held at Bellerive Country Club Aug. 5 through 12. The students began their internships in early June and worked through the post-event festivities on Aug. 24.

The students gained this experience as part of the operations team directly working with the PGA of America and Barton G, an internationally known event management and entertainment company that is also one of the premiere event partners of the PGA Tour.

Connor Helper, Natalie Long, Patrick Kristin, and Zach McKinley were the interns for the PGA of America, and March Tahull, Zach Turnure, and Nick McCullough were interns for Barton G.

The interns gained hands-on experience at the event before, during, and after the event. Duties included set-up of sponsor tents, logistical planning and construction of event facilities. The students also provided customer relations support, interacting with corporate sponsors, PGA personnel, media, and labor crews. 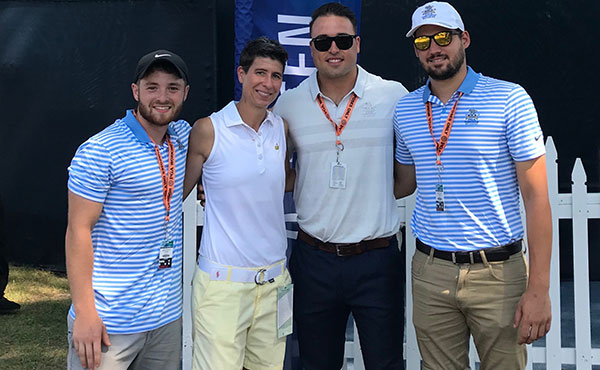 “Being a part of all the behind the scenes work leading up to the tournament, I was able to gain an entirely new insight into sport and entertainment events,” said Turnure. “It was incredible to see all the companies involved, each with their individual responsibilities to create the best, most high-class three-day golfing event.”.

Long said she had a similar experience.

“This experience has certainly been the most ground breaking in my education at Lindenwood,” she said. “For two months, I got a first-hand look at how a major event like the PGA Championship is created, executed, and then disassembled. I learned truly how much work, time, and preparation goes into holding a major sporting event such as the 100th PGA Championship.”

The full-time volunteer operations coordinator for the event was Noelle Johnston, a alumna of the Lindenwood Plaster School of Business & Entrepreneurship who also played golf for Lindenwood.

“Hosting the 100th Annual PGA Championship in St. Louis, Mo., was not only an amazing experience for golf fans,” said Molly Hudgins, of Lindenwood’s Plaster School of Business & Entrepreneurship, “it was a once-in-a-lifetime experience Lindenwood students to gain invaluable experience. Lindenwood students and alumni had the chance to gain ‘real experience’ working with outstanding leaders in the field of sport and event management.”