Lindenwood Students Offer “Insight” on Books through a Television Show 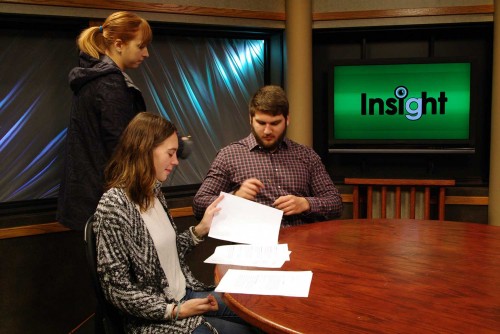 What started as an idea for content on the Lindenwood television station LUTV has expanded into a television show that has lasted over 25 years, more than 700 shows, and now reaches over 200,000 viewers in five states.

“About 26 years ago the TV station was in Young Hall and they were looking for shows,” Cernik said. “We sat down and worked out how to set up a show involving a course, so I created a course specifically for TV.”

Before recording the shows, Cernik and the students meet for the traditional course for the first six weeks of the semester and learn how to take notes about the book to use on television and think about substantially discussing a book. The students and Cernik record shows over seven weeks every semester and then meet to analyze the show and how they performed on television. Cernik explained that the television aspect of the show has a deeper purpose.

“The show helps students, specifically, those who want to prepare for law school,” he said. “In law school, there is moot court, which is usually televised, so students see how they would look in front of a judge and jury.”

Cernik said it is important to prepare students on how to take book notes they can use and to see past shows, as well as focus on how they present themselves.

“Appearance matters, particularly regarding not having them look down at their notes when the camera is on them, so they collect their thoughts before speaking,” Cernik said. “It takes time to make them feel comfortable that they can give their opinions, likes and dislikes, and that is uncomfortable for many students.”

Cernik said that the course has not repeated a book for over 20 years. He explained that the original format for the show is still in use.

“I read an opening quote from a book so the audience has some sense about the book, a way of giving some background,” Cernik said. “Then students respond to that quote and we're ‘off to the races,’ where they discuss what they got out of a book.”

Lindenwood student Marina Vela is a junior with a triple-major in international business, public administration, and political science. She enjoys the class, and the recording of the show.

“My favorite part of the class is the actual show,” she said. “It gives us a lot of real-world experience.”

Vela added that preparation is key; taking notes while reading the book and focusing on the main points. She said that watching the show, however, is not always pleasant, but she likes that she can work on her weaknesses.

“I always feel a little embarrassed to see myself on the screen, also knowing that English is not my first language, but I like that I try, and I see myself pushing to do better every time,” she said.

Vela said she enjoys the cooperative nature of the show, which utilizes other Lindenwood Arts, Media, and Communications students to record and produce the show.

“I really like that there are two classes cooperating and working together” Vela said. “The students behind the cameras and the control room are learning as well as we are. They show a lot of support to us, and they always cheer us up before and after the show. I really like the fact that is okay not to be perfect, and if you messed up one time you will have more opportunities to do better.”

LUTV Production Manager and Assistant Professor of Communications Brandon McKinney said that Insight is shared via the PegMedia distribution network.

“It is an online resource for PEG (public access, education, and government) video producers and broadcast outlets as a means to share programming for the public,” he said.

Insight airs daily on LUTV, which reaches more than 50,000 cable television subscribers in the St. Louis area. Insight is also available in Maine, Louisiana, Wisconsin, and Connecticut, reaching an estimated audience of 148,600 households outside of the traditional LUTV viewing audience. The episodes are also available on the LUTVOnline YouTube channel.