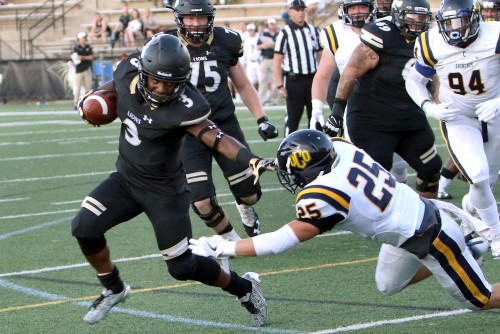 The Lindenwood football team opened the 2016 season with a 49-26 win over Central Oklahoma. The Lions trailed by seven at halftime, but outscored the Bronchos 36-6 in the second half.

Triggs' first touchdown put the icing on a big third quarter for Lindenwood as it scored three unanswered touchdowns to take a 34-20 lead. The Lions took the kickoff in the second half and went on an eight-play, 70-yard drive which tied the game at 20. The big play came early in the drive when Mason Bendigo found DeSean Warren for a 39-yard gain on a third-and-one play. Bendigo scored with a one-yard run into the endzone.

After trading punts, the Lindenwood defense forced a turnover near midfield. Five plays later, Kendell Sparks scored on a 30-yard pass play from Bendigo. On Central Oklahoma's next drive, Triggs intercepted a pass and took it 45 yards for a touchdown.

The Lions entered the final quarter with a 34-20 lead and the ball. Lindenwood worked its running game in that drive, and Shakeem Wharton eventually broke loose for a 23-yard rushing score.

Central Oklahoma finally got points in the second half on its next drive, but Lindenwood quickly regained momentum when Quran Williams blocked the PAT and Ben Jackson returned it for a defensive PAT. The final scoring came late in the game when Triggs intercepted a pass at the Lindenwood 40 and took it 60 yards for the record-breaking touchdown.

Lindenwood's strong second half masked a first half in which Central Oklahoma put up big statistics but couldn't pull away on the scoreboard. The Bronchos scored on the opening drive of the season with a field goal, but Lindenwood answered on its first drive. A 73-yard kickoff return by Sparks gave the Lions great field position, and Sparks was able to finish the drive on a six-yard pass play from Bendigo. After a missed extra point for the Lions, the Bronchos scored again for a 10-6 lead.

Central Oklahoma reached Lindenwood's redzone on its next two drives, but the Lions got a turnover on downs and an interception to keep the game close. The Bronchos did score a touchdown later in the half, but the Lions had a big drive to get back in the game. On a fourth-and-three play in the redzone, Bendigo found DeVonte' Majors all alone in the endzone for a touchdown. Central Oklahoma was able to get three more points in its two-minute drill to go into the break with a 20-13 lead that didn't hold up in the second half.

The Bronchos had 587 yards of total offense, compared to 451 for the Lions. Lindenwood outgained Central Oklahoma in the second half, though, and forced four more turnovers in the game. The Lions finished with 174 rushing yards and averaged 5.4 yards a carry. The Bronchos, which were in the top-25 in the nation last year in rushing yards, were held to 163 yards on the ground, and just 4.0 yards a carry. Lindenwood finished with 273 return yards in the game, including Triggs' interception yards and 114 kickoff return yards from Sparks.