Rachel Morgan, a graduate student in the Lindenwood University School of Education, has written a children’s book, Building Forever Friendship: Strategies to Help Your Friend with Autism or Other Special Needs at School, which was recently featured on KMOV Channel 4’s Great Day in St. Louis program. 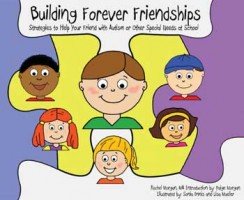 The book addresses scenarios that children may encounter at school when interacting with peers who have special needs.

The project originated two years ago when Morgan’s daughter, Paige, a second-grader at Hawthorn Elementary School at the time, encountered children mimicking behaviors characteristic of those with autism. She was upset by their actions because her brother, Adam, then in fourth-grade at the school, has autism.

“Paige came home and she was really upset and angry, and she wanted me to go to the school and talk to the kids,” Morgan said. “I told her I didn’t think they were being mean, they were just trying to figure it out. I suggested that educating the kids might mean more coming from her, so that’s what she did.”

Morgan selected an existing book that explored the relationship between two siblings, one with autism, and their home life. She sent the book to school with her daughter, who, with the permission of administrators, read the book to all second grade classes and answered students’ questions.

Six months later, Morgan’s daughter approached her again and pointed out that her classmates now understood special needs interactions at home but still had questions about school interactions. Morgan searched for an age-appropriate book on the topic and was unable to find one, so she decided to write one at her daughter’s urging.

In addition to her own family’s experiences with autism, Morgan has a strong background in special education. She is a certified autism specialist who worked for more than eight years with First Steps, Missouri's early intervention system that provides services to families with children up to 3 years old with disabilities or developmental delays.

“My hope for the book is that teachers and counselors can use it as a platform for discussion within their own classrooms,” she said. “I hope it promotes brainstorming and an open dialogue among students and helps them find ways they can better manage situations at school.”