Lindenwood University-Belleville unveiled its newest facility last week, specifically serving its veteran student population. The Major General William L. Enyart Veterans Success Center was officially dedicated in a private ceremony and honors Enyart, now a U.S. Congressman. The naming was made possible by a gift from his wife, retired Judge Annette Eckert, and his family. 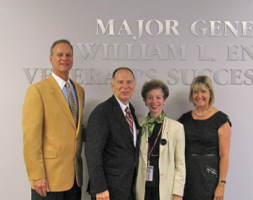 “We could not be more pleased to open the Major General William L. Enyart Veterans Success Center to better serve our students who sacrificed so much for this country,” said Lindenwood Belleville President Jerry Bladdick. “It is our honor to pay tribute to Congressman Enyart and his years of military service through this new student facility.”

In 2013, the campus had 78 veteran students enrolled in classes. Today, there are 115 VA students on campus, and that number is growing. Since the VA Success Center opened on July 1, more than 50 veteran students have visited the facility.

“The center will provide a lounge and study space for veteran students to meet one another and spend time between classes,” said Debbie Suttles, director of veteran affairs. “It will also serve as a resource for veterans trying to adjust to college life or seeking to learn more about their GI Bill benefits and Tuition Assistance through the Armed Forces. Our veteran students are very important to us, and we are proud to be able to offer them a centralized place for these services.”

Congressman Enyart expressed his support of the new facility, saying “I couldn’t be more pleased with how this new facility has been completed. I received my post-secondary education as well as my law degree as a result of GI Bill benefits. During that time, veteran centers did not exist, so I am glad that Lindenwood has recognized the need and provided a resource for veterans to get together and provide each other the support only another veteran can provide. Lindenwood is a veteran-friendly university, and I am proud to be a part of the effort to give back to our nation’s veterans who have given so much for us.”