Members of Honored Class of 1968 Visit Lindenwood for Homecoming 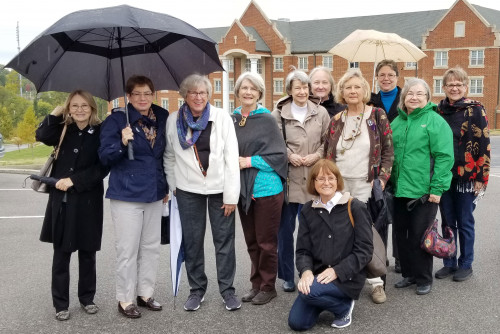 A group of Lindenwood alumnae from the Class of 1968 visited Lindenwood and toured the campus during the 2018 homecoming weekend for their 50-year reunion.

The class took tours of the J. Scheidegger Center for the Arts, Evans Commons and Hyland Arena, the Library and Academic Resources Center, and the Spellmann Center, and they went on a drive through the Heritage side of the campus. Enrollment Management staff Sara Wiedman, Kara Schilli, and Jazmine Newsome and Kassandra Linzmeier from University Relations joined the group on the tour, guided by President’s Ambassadors Hayden Rosenthal, Hunter Drew, and Selena Tuilaepa.

“It was a true honor to have the alumni from the class of 1968 back on campus,” said Linzmeier. “They were very excited to be back and really enjoyed meeting all the students and staff on the tour.”

Student body president Pat Stone, originally from Muskogee, Okla., and now residing in Dallas, Texas, was among the group. When she graduated, Lindenwood University was Lindenwood College for Women; men would not be admitted to the school until the next year in 1969. She had not been to Lindenwood for 30 years. She said she thought the biggest change to Lindenwood was to the campus.

“The buildings that were not there,” she said. “A football field.”

She also mentioned that a field she used to walk through to get to the Episcopalian church is no longer there but enjoyed revisiting the locations in which she was familiar.

“The Heritage campus was delightful to walk around and see the places where we lived and studied,” Stone said.

Linzmeier noted many of the group were impressed with the new buildings on campus.

“Most of these buildings they saw for the first time,” she said. “It was amazing to see their faces light up when they saw what we have accomplished as an institution in the past 50 years.”

The President’s Ambassadors made a good impression on Stone.

“When I met the President’s Ambassadors, I was so impressed with the young people, their knowledge of current status of the campus and their interest in when I went to school there,” Stone said.

“A women’s college was an opportunity for women to step into a world that we defined, to move beyond the status quo…to dream of a professional career, a graduate degree, to watch a generation lobby for social justice and civil rights,” she said.

“Use your education to change the world for good,” she said. “Find the unique opportunity to grow an idea, a dream into a reality, believe you can do anything and then make it happen.  Lindenwood was that platform for us as women, but it can certainly be the platform for all of you to break barriers and build bridges.”