Morris to
Speak in New York on Wall Street Book

Morris to
Speak in New York on Wall Street Book

HOME
About
News
Morris to Speak in New York on Wall Street Book
About NAVIGATION
January 29, 2016 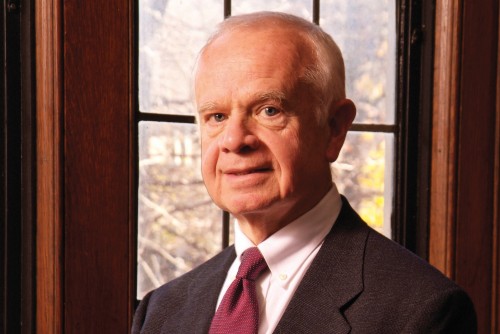 Edward Morris, Lindenwood professor of finance and former dean of the Robert W. Plaster School of Business & Entrepreneurship, will be a featured speaker for Columbia University’s Lehman Center at noon on Feb. 16. Morris will speak about his book, Wall Streeters: The Creators and Corruptors of American Finance, which was published in October 2015.

“I was flattered by the invitation and I am excited by the opportunity to raise, and hopefully enhance, Lindenwood’s profile in the academic world,” Morris said.

Morris’ book details Wall Street’s transformation from a clubby enclave of financiers to a symbol of vast economic power. It begins with J. Pierpont Morgan, who ruled the American banking system at the turn of the 20th century, and ends with Sandy Weill, whose collapsing Citigroup required the largest taxpayer bailout in history. In between, Wall Streeters relates the triumphs and missteps of 12 other financial visionaries.

“Many of Wall Street’s contemporary trends, including the 2008 financial collapse, the expansion of corporate and private wealth, and the influence of money in politics, can be traced back to the work of 14 critical figures who wrote, and occasionally broke, the rules of American finance,” Morris said....

Morris said the book grew out of a class he began teaching for the 2009 J-Term.

“I’ve long had an interest in financial history and thought J-Term would be an opportunity to present a course,” Morris said. “The idea for using mini-biographies stemmed from a book I enjoyed in high school called the Microbe Hunters. It profiled the pioneers in medical research like Lister and Pasteur. Then in college, my economics professor assigned The Worldly Philosophers, a book that traced economic history through mini-biographies of major players like Adam Smith and Maynard Keynes. I just used the same kind of format with respect to groundbreakers in finance.”

Prior to joining the business faculty at Lindenwood in 2002, Morris was an investment banker and executive vice president of Stifel, Nicolaus and Company. He also served on the boards of several publicly traded companies.

Wall Streeters: The Creators and Corruptors of American Finance was published Oct. 13 by Columbia Business School, Columbia University Press in New York. It is available at Left Bank Books and other book retailers.

The speaking event at Columbia is open to the general public.

Author Edward Morris on the Innovators Who Shaped Wall Street