The Lindenwood Belleville men’s and women’s soccer programs are building from scratch on several different fronts as they prepare for their inaugural seasons next fall. 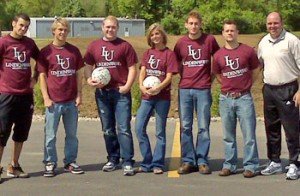 The most visible sign of the growth of the new program is the construction of a new Bermuda grass soccer field on the campus. This grass is preferred over field turf and other grasses for soccer because it offers a true roll for the soccer ball and avoids bad hops that other surfaces often cause. This surface is rare in this area, and Coach Daniel Hogan predicts that the new field will be the nicest grass soccer field in the Metro East area.

Work on the new field began back in February when engineers laid out the proper soccer dimensions. In April, the old grass was removed and the field was laser leveled. The project continued in May with the installation of an irrigation system and a final grading of the land. Next week, the grass will be planted and grown throughout the summer until August 15, when the soccer teams are scheduled to begin play.

The new field is being installed by Munie Greencare Professionals. Lindenwood also hopes to erect fence around the field and install a scoreboard before the first home contest.

While the new field is getting ready, Hogan is also busy putting together the men’s and women’s soccer rosters. The last month has shown a lot of progress in this area with numerous local kids coming on board.

“Kids are excited about starting something from scratch and being a part of the inaugural soccer teams at Lindenwood Belleville,” said Hogan.

The Lynx men’s soccer team is scheduled to have its home opener on Sept. 12 against Parkland CC, while the women’s program plays its first home game three days later versus St. Louis Community College-Forest Park.