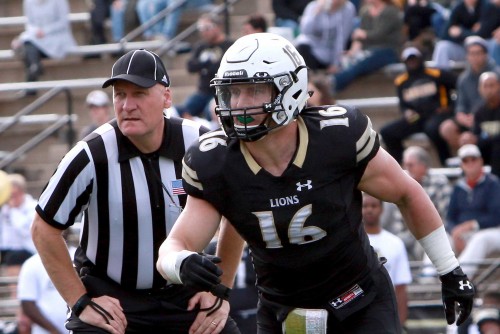 For the second time in four years, a Lindenwood football player is going down the path towards the National Football League. Connor Harris hopes to join Pierre Desir as the second Lion selected in the NFL’s annual draft late this April.

The two players have made similar journeys following their Lindenwood careers. Both were named winners of the Cliff Harris Award, given to the top defensive player in the country among NCAA Division II, NCAA Division III, and NAIA programs. Both participated in the Senior Bowl, making Lindenwood the only MIAA program with multiple participants in that event, and both tested at the NFL Combine.

The similarities end there, however, as the two had different playing styles in their collegiate careers. Desir was one of the most feared cornerbacks in the NCAA and rarely saw the ball thrown in his direction. Harris, a linebacker, was in on nearly every defensive play over his career. He set an NCAA all-division record with 633 career tackles and averaged over 13 tackles a game in his career. Harris was a three-time All-American and four-time all-MIAA selection while making the case to be considered the best football player to go through the Lindenwood program.

Harris will learn his future employer on April 27-29 when the NFL Draft is held in Philadelphia, Penn. One interesting landing spot would be the Seattle Seahawks, where Desir is currently playing.

Developing the leaders of tomorrow, by building champions today.