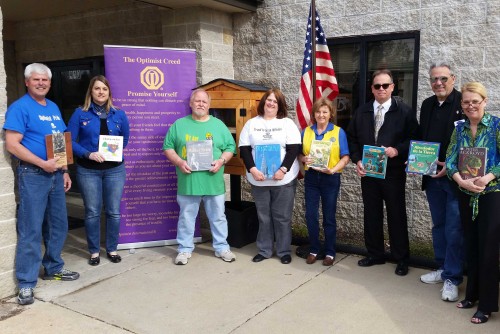 The lending library provides gently used books for loan within the community. As the books are finished, they may be exchanged, and community members may donate books to the library. The Wentzville-Lake St. Louis Optimist Club will maintain the library to ensure it remains in good order and has books available. Materials for the construction of the Lending Libraries were donated by Lowes and Home Depot of Wentzville, Mo.

“The Optimist Club of Wentzville-Lake Saint Louis is very proud to partner with Lindenwood University for the dedication of this community lending library,” Club Secretary/Treasurer Dianne Ohlms said, “but most importantly, our club is proud to serve the children of our community because of this project.”

Optimist International is one of the world’s largest service club organizations with over 80,000 adult and youth members in almost 3,000 clubs in the United States, Canada, the Caribbean, and Mexico and throughout the world. Carrying the motto “Bringing Out the Best in Youth, in our Communities, and in Ourselves,” Optimists conduct positive service projects that reach more than six million young people each year. To learn more about Optimist International, call (314) 371-6000 or visit the organization’s website at www.optimist.org.