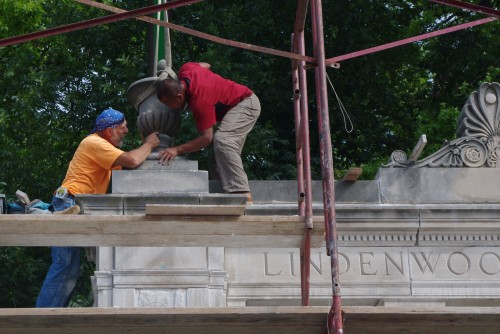 The careful restoration of Lindenwood University’s historic Alumnae Gate is entering its final phase. The gate, which was partially knocked down by a tractor trailer on June 24, is standing and whole once again. The third and final phase consists of restoring intricate details and re-mortaring the gate’s joints.

A nationally known expert in the field, Felling Contracting, is handling the project. For the third phase, Brick and Stone Restoration, a Chicago-area masonry company, will perfect the gate’s details. Felling expects to complete the project by Aug. 1, but noted the effort is ahead of schedule.

Dave Felling has over 40 years’ experience in historical architecture restoration. His company specializes in restoring artifacts for institutions. He said the key to restoring the gate with care, precision, and speed was getting the right people for each job.

“We became really focused on getting done,” Felling said. “We put a spanking on this job.”

Robert Pecoraro, special projects manager at Lindenwood, said he was impressed with the state of the gate just three weeks after it was toppled. He said he particularly liked the use of precision lasers to perfectly set pieces in their rightful place.

“If you look at it now, it looks like both sides of the gate were built together,” Pecoraro said.

Pecoraro also said he was grateful that Felling was making other improvements to the gate. Lindenwood constructed the Alumnae Gate in 1921 using donations from the institution’s alumnae.