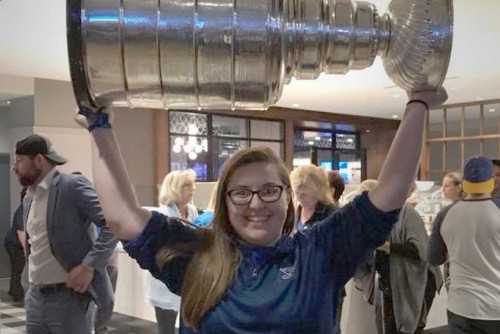 During the 2018-19 academic year, 50 Lindenwood University sport management students took internships and practica with organizations like the PGA, the St. Louis Cardinals, the St. Louis Sports Commission, the Kansas City Chiefs, and many others. Five of those students had internships at the St. Louis Blues and had a rare perspective on a team in the midst of a historic playoff run.

Emily Benn, Joshua Bell, Jason Davis, Tim Duck, and Skylar Starbeck performed internships with the team during the season and in the playoffs. Benn, a sport management major, has worked in building operations, which is responsible for preparing the building for events. When the playoffs started and especially as the Blues advanced, she saw changes in activity level and a marked increase in media outlets covering the game. 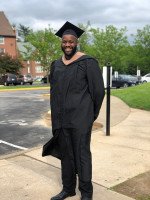 “All of our storage areas were flipped into media space,” Benn said. “Throughout the first three rounds, there were minor changes, but round four was definitely a drastic change.”

Bell, who worked with the St. Louis Blues Alumni Association, performed a variety of support duties, such as preparing the Alumni Suite for games, as well as helping with everything from publications to social medial projects. He also said the pace and atmosphere during the playoffs was palpable with more to do in a frenetic environment.

“The fans are excited, the front office is excited, and the players are excited,” Bell said. “I have enjoyed it all though; this whole program has been a blessing for me.”

Molly Hudgins, Lindenwood’s associate provost for curriculum and experiential learning, said the internship opportunities in sport management are an example of the approach the university takes with all its programs.

“Students are encouraged to pursue internships and are provided assistance in exploring opportunities, allowing students across academic disciplines an amazing opportunity not only to become career-ready but also to explore their career options through hands-on practical learning,” Hudgins said.

The Blues took their playoff run all the way to the seventh game of the finals on June 12 and finished it off with a definitive 4-1 win in Boston. At 5 a.m. June 13, Benn was among the team staff that greeted the team when it arrived at the Enterprise Center, Stanley Cup in hand. As the players had done on national television the night before, Benn had the opportunity to hoist the cup over her head in victory.