The Grammy Award-winning St. Louis Symphony will make its debut performance at the J. Scheidegger Center for the Arts at 2 p.m. on Sunday, April 12, with Music Director David Robertson leading a program of familiar classical favorites. 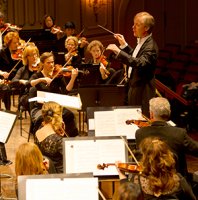 The orchestra will explore themes of music and drama with selections from Grieg’s Peer Gynt, Brahms’ Hungarian Dance No. 5 and Mussorgsky’s Night on Bald Mountain, famously featured in Disney’s Fantasia. A limited number of $25 student tickets are available with a valid college student ID. Call 314-534-1700 to receive the discount. Ticket prices for the general public range from $35 to $75; call 636-949-4433 or visit www.luboxoffice.com for more information or to purchase tickets.

“As part of Lindenwood’s commitment to play a leading role in the cultural enrichment of the region, we are honored to host the St. Louis Symphony and look forward to their performance with great anticipation,” said Dr. Joe Alsobrook, Lindenwood’s dean of fine and performing arts. “Lindenwood has an ideal venue for this special event. Concert goers will find the Scheidegger Center to be an elegant and intimate setting with exceptional acoustics.”

The Scheidegger Center is located at 2300 West Clay St. in St. Charles, less than one-quarter mile from Interstate 70. Ample free parking is available in any of the three lots surrounding the venue.

Founded in 1880 and now in its 135th season, the St. Louis Symphony is the second-oldest orchestra in the country and widely considered one of the world’s finest. In September 2005, internationally acclaimed conductor David Robertson became the 12th music director, the second American-born conductor to hold that post in the Orchestra’s history. The St. Louis Symphony strives for artistic excellence, fiscal responsibility, and community connection while meeting its mission statement: enriching people’s lives through the power of music. The Symphony presents a full season of classical programs and Live at Powell Hall concerts and hundreds of free education and community programs each year. Media partners include St. Louis Public Radio, 90.7–KWMU, which broadcasts the Symphony’s Saturday night subscription concerts live, and The Nine Network, which regularly features STL Symphony performances on its Night at the Symphony program.

Lindenwood University, founded in 1827, is an independent liberal arts university offering more than 200 undergraduate and graduate degree programs in diverse areas of study in traditional and accelerated formats, including online. Lindenwood operates residential campuses in St. Charles, Mo., and Belleville, Ill., as well as regional centers throughout the St. Louis Metropolitan Area.