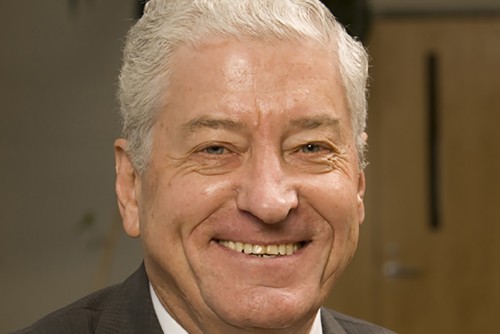 The Lindenwood University family is mourning the loss of longtime board member Jim J. Shoemake, who passed away on Wednesday, June 28.

“We were saddened to learn of Jim’s passing,” said Michael D. Shonrock, Ph.D. Lindenwood University System President. “He was a respected leader at Lindenwood, and our thoughts and prayers go out to his family.”

In presenting the Sibley Medallion of Honor to him, fellow Board Member Lucy Rauch emphasized Mr. Shoemake’s lifelong thirst for knowledge and his love for the “fun of learning.”

Born in Greenville, Mo., Mr. Shoemake moved to St. Louis in 1967. He earned his law degree from Saint Louis University School of Law and worked for the U.S. Justice Department before entering private practice, where he won one of the largest jury verdicts in U.S. history. He was a longtime senior partner at Guilfoil, Petzall & Shoemake, L.L.C.

During his time on the Board of Directors, Mr. Shoemake took great interest in Lindenwood, not only the success of the institution, but the success of its students and alumni. The campus saw many changes during that time, but for Mr. Shoemake the center was always the importance of education.

Mr. Shoemake’s passion for education was only rivaled by his love of horses. He also served as the president and the vice president for the American Quarter Horse Association.

He is survived by his wife, Rita; three daughters, Susan, Kathy and Sarah, and their spouses; and 11 grandchildren.