Home
About
News
University to be Part of St. Louis International Film Festival for Kids

University to be Part of St. Louis International Film Festival for Kids

For the second year running, the Lindenwood University Film Series will be a venue for the 2014 St. Louis International Film Festival Kids Festival with free screenings of two films at air-conditioned Young Hall Theatre. 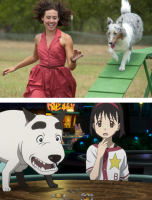 Lindenwood University will show the feature film My Dog the Champion at 1 p.m. on Saturday, August 2, 2014. Dora Madison Burge (Friday Night Lights) stars as Madison, a spoiled big-city 16-year-old with a full teenage social life. But when her mom is deployed overseas for three months, Maddy is sent to live with her hard-nosed grandfather (Lance Henriksen of Aliens) at his rural cattle ranch. In this strange place with no Wi-Fi, Maddy meets 17-year-old dog trainer Eli (Cody Linley of Hannah Montana), grows to love and respect her stubborn grandpa, and bonds with an old cattle dog who just may have the potential to be a blue-ribbon champion. The film will be shown with the short film Minimum Max (Joshua Ovalle, U.S., 2014, 3 min.), in which Max navigates the world of ADD and all the medications that come with it. The film is appropriate for all ages.

Welcome to the Space Show will be screened at 1 p.m. on Saturday, August 9, 2014. With an intergalactic cast of thousands, Koji Masunari’s colorfully explosive debut feature sets a new high for visual spectacle and sheer inventiveness of character design in what has to be one of the most gleefully surreal depictions of alien life forms ever portrayed in cinema. It seems like just another lazy summer is in store for Amane and older cousin Natsuki, but boredom quickly vanishes when they find an injured dog in the woods and bring him back to the cabin, only to discover that he is not a dog at all, but Pochi, an alien botanist sent to Earth to track down a rare and powerful plant called Zughaan (better known to Earthlings as wasabi root).

Before long, Pochi has whisked the kids away to a space colony on the dark side of the moon, an interstellar melting pot where we experience a non-stop parade of humorous alien creatures, jellyfish spaceships, dragon trains, and a theme song from Susan Boyle. The film is appropriate for age 8 or older.

Pictured: My Dog the Champion (Top), Welcome to the Space Show (Bottom)