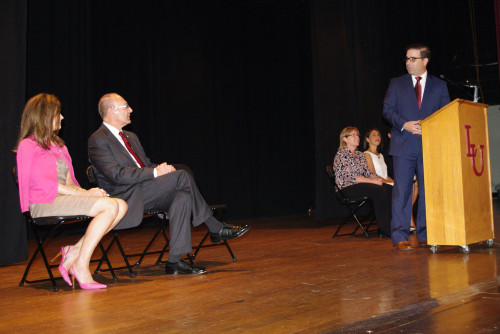 Barger will replace Dr. Jerry Bladdick, who is leaving Lindenwood for a new position in Florida.

Barger is a longtime member of the Lindenwood family, having first arrived at the St. Charles campus as a student in 1990. He was hired in 1994 and has three Lindenwood degrees – EdD, MBA, and BA. Barger currently serves as the associate vice president for operations and finance. He previously served the St. Charles campus as dean of evening and graduate admissions and extension campuses.

“I am excited to be a part of this campus and the community,” Barger said. “We’re focused on building a great future and what we will look like in 2023 when Lindenwood Belleville turns 20.”

Barger acknowledged the Belleville faculty, staff, and students “for building a strong foundation.”

He and his wife, Yarah, have been married 17 years. They have three children: Ian, Abby, and Audrey.