What Stockett didn’t know when she started her 150 hours of service in July was that she would leave a permanent mark on the people who hosted her internship. 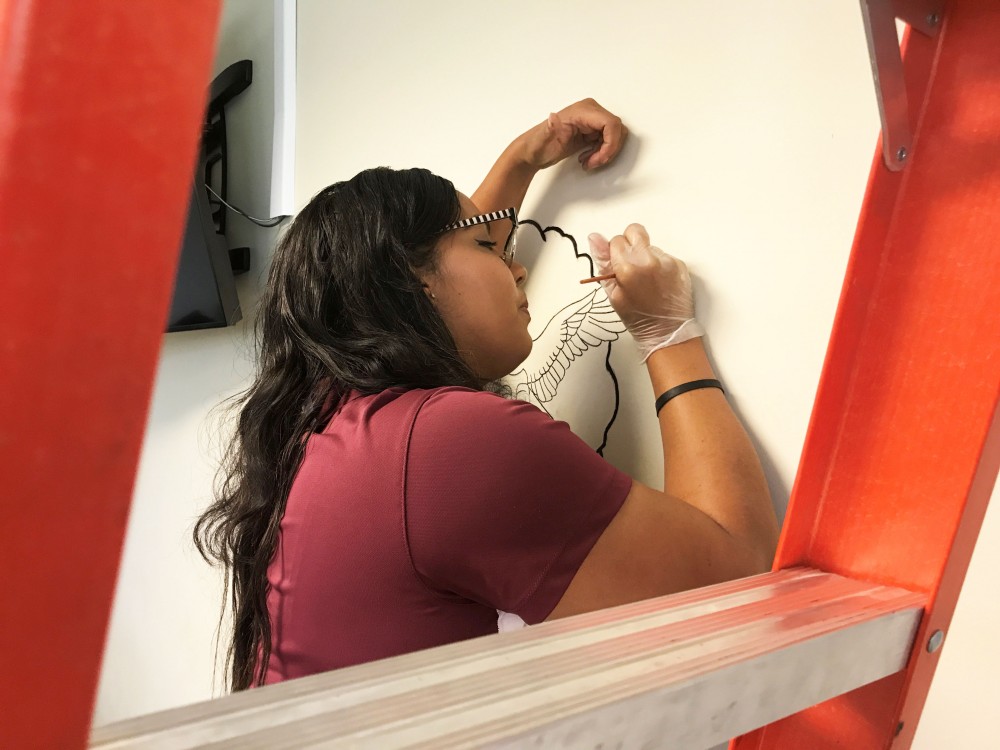 After hearing that the commander of the security forces at the base wanted to make the walls of the organization’s meeting room a tribute to peers who fell in the line of duty, Stockett volunteered her services to paint a series of murals.

“Our commander brought up the idea of doing something with these walls a while ago, and we started looking into some options,” said Air Force Master Sgt. Greg Riley. “Some of the things we liked were going to cost hundreds if not thousands of dollars. When Ginger showed us some of her work and said she’d like to paint murals on our walls, the commander said, ‘make it happen.’”

Stockett is nearing 50 hours of work creating the original drawings, mapping out the murals on the walls and painting them. Her images include the swooping eagle of the Air Force security force’s logo, an American flag with a blue stripe representing police officers, an image of a badge with a black band across it worn by law enforcement workers to commemorate a peer who has died, and 14 stars on a wall of honor, one for each Air Force Security Force officer who has died since Sept. 11, 2001.

“It’s such an honor to be able to do this,” said Stockett as she painted the wings of the eagle that rests atop the Security Forces badge. “I feel very fortunate to have the opportunity to participate in this internship, and to know that people will come into this room and see this for years to come is very humbling.”

Instead of costing thousands, the project cost $160 for paint and supplies, and security officers chipped in to buy lunches for Stockett.

“She has had to take time off from work to do this, so it is costing her money to donate her time,” Riley said. “It was the least we could do to buy her some orange chicken from the Chinese restaurant.”

During her internship, Stockett worked the base gate, did patrols around the base, did research, and even volunteered to be shocked with a taser. It was an experience she said was interesting but that she wasn’t eager to try again. One of the most exciting times of her experience was when the base held an open house that featured the Air Force Thunderbirds as the headlining act of the accompanying air show.

“That was right after she started,” Riley said. “I think she put in about 40 hours that week of her 150-hour total when, typically, she’d work six to eight hours a week. But she never got tired and was always ready for more.”

Retired Circuit Judge Annette Eckert, a recruiter for the Lindenwood Belleville Criminal Justice program, said the internship has been invaluable to both students and the Air Force.

“This is a wonderful opportunity for our students, because this is an experience they can’t get anywhere else,” said Eckert. “It’s also an opportunity for students who are interested in a career in the military to check out what it’s all about.”

Stockett walked in May graduation but had to finish two remaining courses this summer to complete her degree. In the coming weeks she hopes to join the Air Force with plans to enroll in its officer training program and eventually join the security forces. She was the fifth Lindenwood Belleville student to participate in an internship with the 375th Security Squadron since the internship program was created with the organization last year.