We invite you to visit the School of Arts, Media, and Communications, which is located in the magnificent J. Scheidegger Center for the Arts. Students who choose Lindenwood University’s School Arts, Media, and Communications have the extraordinary opportunity to work and study at the J. Scheidegger Center for the Arts. With state-of-the-art equipment unmatched by any other Midwestern university, the center features two professionally equipped theaters, an art gallery for exhibiting traditional and multimedia artwork, dance studios, music studios, traditional classrooms, scene and costume shops, and multiple computer labs.

This traditional proscenium space boasts a 1,200-seat auditorium and a 110-by-66-foot stage with a 72-foot grid and 68 line sets. Elegant and intimate in its design, the theater has one of the largest and most sophisticated stages in the region. The Lindenwood main stage readily accommodates Lindenwood University productions and large scale national and Broadway tours, as well as concerts, world renowned dance, and celebrity appearances. 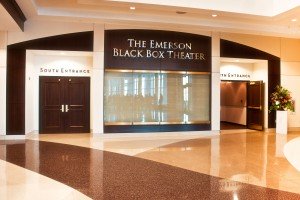 Groundplan of J. Scheidegger Center for the Arts